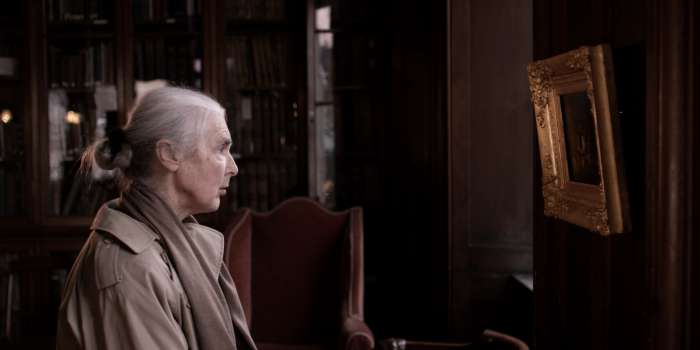 A Moment Twice Lived explores our perception of the passage of time through the subjective experience of memory, aging and dreaming. The circuitous narrative focuses on a fleeting moment when a lone character studies the surface of a painting and begins to sense she has seen the image before. As the character becomes absorbed in the painting’s composition she begins to experience dual realities and the composition becomes visualised as a parallel film shoot in which she performs the lead role. The narrative oscillates between the two inter-connected scenes and the distinction between past, present and future becomes increasingly blurred, creating an impression of time that is distorted.

4K film transferred to HD 11.45 minutes, the work makes reference to JW Dunne’s theoretical book ‘An experiment with time’ (1927), which described a series of precognitive dreams in which he experienced multiple dimensions of time. Here, Dunne's theories are reflected in the formal structure of the narrative and an analogy is created between the artifice of filmmaking and the experience of time repeated. During the course of the action a voice-over refers to experiences of predictive dreams and feelings of being dislocated from time. The voice-over makes reference to Dunne’s writings and letters in the archive of novelist and playwright JB Priestley who was a supporter of Dunne’s theories. Assembled over many years, the letters sent by members of the public, describe real-life experiences of precognitive dreams. Credits: Camera: Martin Healy Sound recording: Karl Burke Sound design: Karl Burke Lighting: Pete Ray Soundtrack: Neil O Connor Editing: Martin Healy Voice over: Nicola Lyndsay Producer: Mary Cremin Cast Main Character: Anne Marie Kelly Group: Eileen Larkin Brian McCoy Ellen Reddin Sean Oliver Esme Lewis Jean Brady Ambrose Moloney Eamon Donnell Script based on extracts from JW Dunne's An Experiment with Time and Letters from the JB Priestley Archive at the University of Bradford. With thanks to Special Collections at the University of Bradford and to the J.B. Priestley estate Material extracted from the book An Experiment with Time © 2001 By Russel Targ, used with permission from Hampton Roads Publishing c/o Red Wheel/Weiser LLC Newburyport, MA www.redwheelweiser.com A Moment Twice Lived was funded by an The Arts Council/An Chomhairle Ealaion Visual Arts Project Award

A copy of this work is in the Crawford Gallery Collection